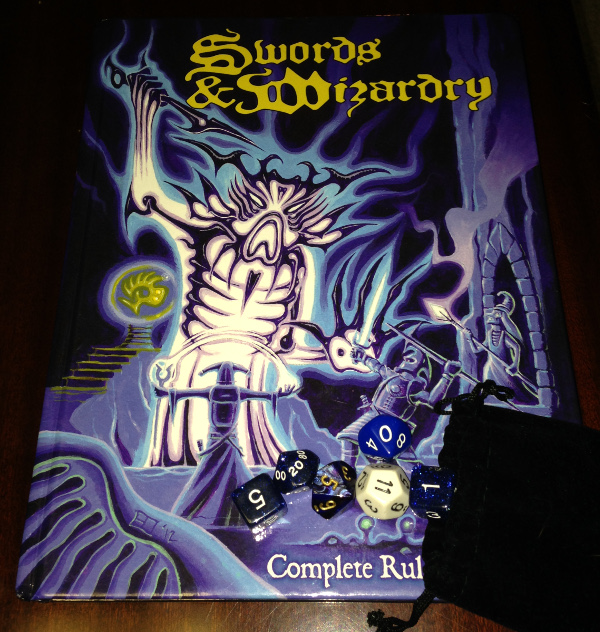 My oldest four and I started playing Swords and Wizardry (an old-school Dungeons and Dragons variant) about a year ago. I'm the DM for the game we play since I had some experience playing as a teenager.  I found it very difficult to let myself be creative at my age and with the cares and troubles that occupy my attention, and it was difficult further because my oldest son MSBJ just as in life, is a bit of a rules lawyer, so we often wind up spending a lot of time doing nothing but arguing over technicalities. TRB, just as in life tends to be quiet and just let MSBJ make all the decisions, even though he stews about them sometimes. JDB is often bored because he has to wait through the arguing and decision making, and almost gave up playing.  MLB is mostly quiet just trying to fit in with the boys and learn the rules. So often we didn't play because it took a few hours each time and I rarely found it enjoyable.

I tried different techniques, I wanted it to be enjoyable for them, and for me. I'd often give them clues that they would almost totally ignore and never investigate. I chalked it up to them living in a near instant-gratification, gimme video game culture.

Tonight a climax to the story happened that I had been waiting on for about the last three sessions. Every time I think I have something good I have to adjust and change plans because the players do something unexpected. Tonight was the first time we played since August...in three months!  I was reluctant but the boys wanted to play and LHB encouraged me, so we went for it.

Things weren't going well for the characters. The situations they faced and decisions they had to make was too much for MLB and it brought her to tears and she cried for a while and I invited her to come sit with me. TRB was mostly just frozen in thought and eventually gave in to the demands of the guards since the lives of his friends were at stake and he could think of no other way out.

Well, the crazy old short and bald homeless man they laughed at, protected, tolerated and sometimes forgot came out of his stupor and saved all the characters.

"MSBJ notices a serious look on Rappeshake's face that he had never seen before. He notices also that his shackles are glowing red and then disintegrate. Rappeshake stood just as the guards were about to plunge their swords into and execute you and he stretched forth his hand and said 'Halt!' and muttered some other words you did not understand.  You look up and though the sun was just shining through the trees, you could see the stars and colors like a rainbow streaming through the sky. The ground becomes transparent and  you see the guards are totally frozen in time. Rappeshake calmly walks to each guard, removes their weapons from their hands and ties them up.  He walks over to each of you and touches you on the shoulder. As he does, you notice your own restraints glow and then fall off as well. After he finished he looks at you and says, 'You have had compassion on me, have compassion on these men too.'  The stars start to fade, the sun comes out and you can see the firm ground and grass beneath you. A familiar vacant and ridiculous expression comes back on Rappeshake's face and he lays back on the ground."

That was the end of tonight's session. The tears and sorrow were past and an excitement and thrill took its place.  They had to pass through a terrible ordeal so that the resolution would be that much sweeter.

Sessions like tonight are the ones that keep us playing. Though they play their own separate games sometimes, they really enjoy the ones with me and I'm glad to have spent the time with them to create a shared story that is better than one I could have come up with myself.